This is part of a series on theological variety. Diversity in theology has been part of Christian faith from the very start. A modern movement is growing which embraces and appreciates it instead of dividing and quitting over it. Find the intro here: Coming Soon: Theological Variety

How does Jesus’ death on a cross magically fix things between us and God? So glad you asked. We don’t know for sure.

“Atonement” is the churchy term for a set of theories on how God fixes the fact that we rebelled against him (churchy word for this is “sinned”). The bottom line conundrum it tries to explain is how God brings us back into right standing with him – a perfect God made humans who chose imperfection, and they can no longer be in his presence unless their imperfection is repaired, atoned for.

Atonement has been a part of Christianity so long that we rarely think how strange it is. If you owe me $500 dollars and I decided to pay myself $500 instead… a little awkward, you see. Why can’t God just say, “Don’t worry about paying me back”? If the price for us sinning is death, why would God letting himself get killed fix anything? And then he comes back alive three days later anyway – it’s like Jesus decided he’d just take a weekend off and that fixes the world.

Did Jesus really just give up his weekend? How exactly does him dying count for billions of us dying? And if he dies on our behalf, why do we have to die at all?

Atonement isn’t as simple or clear cut as your average Sunday morning sermon will have you believe. Because the situation isn’t made clear even in Scripture – and since it has continued to confuse Christians and NonChristians alike – several theories have arisen over the last 2000 years. And that’s okay. If it isn’t clear, there is room for variety.

Many Christians don’t even have an opinion on how the whole “Jesus dies so I’m saved” thing works! And that’s fine too. Jesus never said, “Understand how God’s mysterious ways work exactly if you want to be saved.” He just said, “Believe in me.” But here’s hoping it lets you explore a little more of God’s nature and look across denominational aisles with the ability to respect those who understand him a little differently.

So here’s four major views on how atonement works, views embraced by Christians through the ages – and in the chronological order they were adopted because I’m weird like that.

This view is the earliest, taught by most churches for the first millennia of Christian history – and it focuses on all the passages in Scripture that refer to Jesus or God as redeemer, savior, rescuer. He is depicted as triumphant over death, saves us from slavery, ransoms us from evil. The point of this view is that Jesus defeated our enemies, which liberated us to reunite with God. This view is immortalized in Paul’s writing to Corinth:

The view focuses on how we mere mortals are victims of evil, a view backed in part by Satan tripping up Adam and Eve in the garden. The earliest church theologians all discussed this view regularly and spoke in terms of Jesus conquering the things that plague us. Athanasius describes the risen Christ as a “monument of victory over death and its corruption.” Due to God’s love, he defeated the enemies that have broken our relationship with him.

Christ victorious is great and all, and there’s an element of truth in it. But it seems to remove our responsibility in what has gone wrong. There seems to be more going on than Jesus simply defeating evil. “Atonement” implies God’s making up for something, not just defeating our enemies and forgetting our sins. He’s not just victorious. He’s paying something off.

Many Christians around the turn of the first millennia desired a fuller explanation – and Anselm of Canterbury (b1033-d1109) delivered.

Anselm’s view was that our sins offend God’s holiness, they disrupt the order of the world he created, and defy his sense of justice. God’s people have entered into a pact (the churchy term for this is “covenant” and the historical term is “suzerain vassal treaty”). 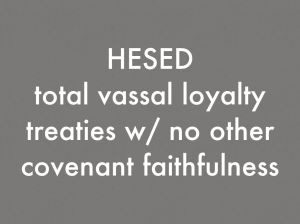 This isn’t about paying the price for us as much as it is meeting our obligations in order for God to remain consistent with his necessary character – holiness, orderly, just. He can’t just overlook our failure. A demand for satisfaction must be met and Jesus’ death on the cross does it. God is just, sin is punished, order is restored, holiness is renewed and we can live eternally with him.

The next view was championed by Peter Abelard (b1079-d1142), who felt Anselm’s satisfaction theory didn’t account for God’s love while Christ victorious didn’t account for our offense. He proposed that Jesus’ sacrifice atones for our sins because he was our perfect moral example. After all, the reason our own death doesn’t pay for our sins is because God demands sacrifices that are without blemish.

God came in human form to be perfect on our behalf, becoming the blood sacrifice that makes up for our imperfection while simultaneously setting the moral example for how we ought to behave toward him and each other. If you aren’t familiar with this view, you’re probably just not recognizing it around you – this is the essence of “WWJD?” (What would Jesus do?) and books like, “Think Like Jesus” (by George Barna). Being a Christian means being more like Jesus every day because he’s the moral example set for us.

Abelard’s moral example theory and Anselm’s satisfaction theory both take the focus away from the devil. Our relationship with God has been broken by us, no matter who tempted us to it. Both these views put the focus on our sins and imperfection, while stressing different sides of God’s character – one, his need to remain holy in our unholy presence, the other, his desire to bridge our breach with a loving but perfect sacrifice.

This view has become increasingly common (popular?) among Protestants and Catholics alike. Many add this view to other theories as a complement – for example, Jesus is the moral example who gained victory over sin, or Jesus is the perfect moral example that satisfied God’s righteous anger.

This view remembers the judgment coming. Think of God as a judge and us as the guilty party. Some sort of punishment has to be given out, and our sins demand death. But our own death simply isn’t enough to pay off the debt. So what is God to do?

In Abraham’s day, an angel let a ram be substituted for the sacrifice of Isaac. This foreshadowed God’s final solution to the problem that our sins and the devil’s treachery have created. Jesus is permitted to stand in our place, accepting the death penalty as a substitution for our crimes against God.

This view makes a lot of sense of the many passages about God’s anger, wrath, and judgment:

“You provoked the LORD to wrath, and the LORD was so angry with you that He would have destroyed you.” (Deuteronomy 9:8)

“You overthrow those who rise up against you; you send fourth your burning anger, and it consumes them.” (Exodus 15:7)

It isn’t even just anger against enemies of his people either: “The LORD’s anger burned against Israel.” (Numbers 32:13)

And this isn’t just an antiquated Old Testament view on God – “The wrath of God is being revealed from heaven” Paul warns in Romans 1:18 before culminating in “the wages of sin is death” (Romans 6:23). Yes, God’s gift is eternal life – but only after Jesus has been substituted to calm God’s righteous anger over our sins. Our reunion with God is only made possible by a heavy cost – Jesus’ death on a cross.

Many Reformers held this view, such as John Calvin who said, “We could not escape the fearful judgment of God” because us “sinners were obnoxious to the judgment of God.” He went so far to say, “Without Christ, God in a manner is hostile to us and has his arm raised for our destruction.” Calvin founded the Presbyterian church and this view is common in American evangelical circles.