Saul was a Jewish theological juggernaut, a mastermind of faith theory, a scholar of who God is and what God wants and how God acts.

And he was completely wrong.

Not only was he completely wrong, he was completed determined, so much so that he was blinded to the truth – his theology was so inflexible the Christian message couldn’t even get through to him.

Jesus had to personally show up on the road to Damascus and blind Saul to jar him out of his fixed theological assumptions, his judgmental faith attitude, his spiritual blindness.

This is a cautionary tale Christians should take to heart.

Saul was the perfect Pharisee – so wrapped up in rules and technicalities, legalism and judgment, theories and rote practices that he actually missed the character of God. He didn’t value relationship, love, unity, or evangelism. These are the values of God. Sharing, not hoarding. Caring, not cursing. Building up and uniting, not tearing down and dividing. Faith is not a checklist to perform, but a partnership between God and people with the goal of bringing more people in, not drawing lines to push more people out.

Our theologies today rarely matches these stated goals any better than Paul’s.

It is a natural assumption to believe that whatever we were taught growing up is the only thing that could possibly be true. The problem is, churches are rarely good at teaching. They might be gifted at indoctrination, but teaching where the intellect is engaged and questions are asked and options are discussed is rare. Discipleship is pretty bad in most every Christian church I’ve served in.

Many find the faith not worth journeying into because of all the judgment and division they see. Not diversity – division. Diversity is a situation where differences are productive, welcome, and even beautiful – to be desired. Division is where differences drive wedges between people, making each group feel like they are exclusively right or superior. There can be unity with diversity, but no unity with division.

Over the next few weeks we want to take you on a journey of theological diversity. Most people don’t realize how diverse and widespread and beautiful Christianity truly is. Many think the way they learned to practice the faith is the only way anyone is allowed to – and this view is foolish from the start, as Christians have always celebrated and worshiped and fellowshiped in different manners across the ages, across the globe, and across cultures.

Many also think they way they learned to think about faith is the only way anyone is allowed to – again, foolish from the start as the Bible leaves so many things unclear. For a quick vague example, just look at Genesis 1 – is it literal or literary? Young earth, old earth, theistic evolution, instantaneous creation, creation staggered over 7 days or even 7 ages – the variables allow for a wide range of options for how to understand God’s act of making us. So it would be foolish to believe your view is the only one possible, even if you feel comfortable with it and think it is more likely than other views.

“I have not learned wisdom, nor have I attained to the knowledge
of the Holy One. Who has gone up to heaven and come down?
Whose hands have gathered up the wind?” – Proverbs 30:3-4

We plan to tackle a wide range of topics to discuss the various ways Christians have believed or practiced historically as well as across the wide spectrum of denominations today. We’ll talk about practices, like communion and baptism. We’ll talk about believes, like sanctification and atonement. 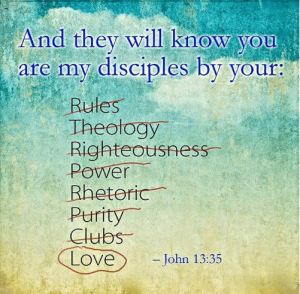 That doesn’t mean theology doesn’t matter. And it doesn’t mean that certain things aren’t clear. It just means that the number of things that are clear are fewer than most Christians suppose – the theological things that are open for debate are extremely common and we must learn to discuss them with civility and to accept each other as family in Christ despite disagreements.

I’ll close with a wonderful analogy from C.S. Lewis. Christianity is like a hall surrounded by many rooms. The hall contains all things every Christian agrees on. God exists. Jesus is savior. Basic propositions that every single Christian can agree on – in fact, must agree on to be a Christian. Someone who doesn’t agree with them is still outside the building – they haven’t entered the hallway yet.

Yet, the hall is just a place to unite and come together – it is not a place to live. You live out faith in particular rooms. Off the hall are rooms with every variety of belief or expression. It’s all the denominations, all the various theologies, all the theories, all the preferences. You become a Christian by entering the hall but then you try out different rooms till you find one to live in for a while.

The problem today is that Christians stand at the door of their room yelling across the hall at other rooms, saying “You’re not Christians” and “You false teachers!” The result is not to attract more people to their own room, but rather the opposite – to drive people out of the hall completely. More than any other thing, division and disunity destroy evangelism and discipleship today.

It’s time to learn more about the beautiful variety and diversity Christian faith allows for, so as to better welcome our brothers and sisters and make a family worth inviting outsiders into. Coming soon…

“Christian faith is a wider, deeper river than the
small puddles many Christians swim in.”

Other articles for this series:
Theological Variety: Communion