This post is part of a series on theological variety and also a companion personal experience piece to a previous article about varieties in belief regarding the Bible. For the introductory article in the Theological Variety series, click here. For the post on views on the Bible, click here.

One of my favorite movies of all time is the 1960 film Inherit the Wind. Depicting the famous Scopes Monkey Trial of 1925, the film revolves around a teacher put on trial for teaching students about evolution. The trial is presided over by a powerhouse atheist defense attorney and a juggernaut of the Fundamentalist movement as the prosecutor. Throughout the film, the focus shifts to the battle over the Fundamentalist theology central to the vitriol in the town against Cates, the teacher, and Drummond, the defense attorney. The tension is further stirred over challenges to the towns’ beliefs of an absolute literal understanding of scripture as central to orthodox Christian belief.

Perhaps part of why I love this film is because it kind of hits home for me. Growing up in a small town Southern Baptist church, I was also raised with the belief of biblical inerrancy: the idea of the Bible being the perfect Word of God bestowed upon humanity, having no errors (at least in its original format) and being the correct and final authority on every issue it addresses (religion, morality, politics, philosophy, science, sexuality, etc.).

For a long time, I bought into this idea. After all, the Bible was to be considered the foundational text of the Christian religion. If the Word of God wasn’t always right, how could I trust anything in faith?

As I got older, I learned that like many good things in the faith, the Bible can be a great tool for a flourishing faith but makes a poor idol. And that is exactly the problem with the doctrine of inerrancy: it makes the Bible an idol.

For crying out loud, I remember going to Vacation Bible School as a kid and having to recite a pledge of allegiance to the Bible, along with the American and Christian flags. Looking back, it was pretty disturbing.

So if inerrancy idolizes the Bible, then why is it still so pervasive in the American evangelical church?

Perhaps it’s because a belief in an inerrant Bible deals with the murky questions around Scripture by simply negating them.

Forget questions about evolution and the age of the earth. The Bible says creation happened in six days, so that has to be correct, right? Forget questions about ancient near-Eastern nomadic tribes and their understanding of astronomy and physical science. If the Bible says the sun stood still for a whole day, then that had to happen right? Plus, humanity all coming from two people in a garden in Mesopotamia, a guy getting a 3 day cruise in a fish stomach, a global flood that killed nearly everyone, all the evil people in the future getting matching 666 tattoos? No questions about those because the Bible says so and that’s the bottom line.

Then there’s the infamous blood, guts, and misogyny of the Old Testament. But since God loved Israel and was apparently really pissed at those darned Canaanites, all the carnage gets a free pass, right?

But, even with its most ardent and Fundamentalist followers, inerrancy still doesn’t have an absolutely firm grip. I can’t help but notice that we haven’t as a “Christian nation” been stoning gays and loose women, banning bacon and shellfish, and that mixed fiber clothes are still in circulation. I mean, those things are in the Bible, so what’s the problem?

The biggest problem I’ve found with the belief in an inerrant Bible is that it doesn’t leave room for grappling with big questions from tough passages, and without truly dealing with those questions, one’s faith can suffer, if not fully implode.

What about the passages with occurrences that deny scientific explanation? What about the presence of poetry and specific literary devices found constantly throughout Scripture? What about the disturbing passages containing rampant violence, genocide, misogyny, and other atrocities that are seemingly condoned by a supposedly loving and just God?

Perhaps we can’t simply turn away from these and cover them with the “God said so” treatment. Perhaps we have to look all of these ugly parts in the face, address them, and do our due diligence to figure out how the fit into the story of the Gospel. Perhaps we have to ask some difficult questions that may not have any simple answers.

The fact is that we have in our faith a weird and ancient book containing many stories, both wonderful and disturbing, and we will have to wrestle with those realities like Jacob wrestled with God. And like Jacob, we’re probably going to walk away with a limp and a blessing.

First, we have to acknowledge a few things about what the Bible is.

It’s an ancient collection of many different books throughout the ages mostly dealing with the history and theology of one ancient near-Eastern people group.

It contains many works that were mainly passed down via oral tradition before being written down.

It contains many different genres, including but not limited to prosaic descriptions of events, flowing epic poetry, songs of worship and lament, wisdom writings, correspondence letters written to specific groups in specific situations, fantastical and cryptic apocalyptic protest literature, and multiple recordings of similar events from various sources.

Needless to say, its complicated.

When God gave us the Bible, God did not give us an internally consistent book of answers. God gave us an inspired library of diverse writings, rooted in a variety of contexts, that have stood the test of time, precisely because, together, they avoid simplistic solutions to complex problems. It’s almost as though God trusts us to approach them with wisdom, to use discernment as we read and interpret, and to remain open to other points of view.

We have to accept certain facts: that we have leftovers of stories long passed down through oral tradition about how God worked in the world, that there are poetic devices talking more about the power and glory of God than the chronology and mechanics of God’s actions, that we have many stories of violence and bloodshed written by the people carrying out said violence and bloodshed, that a bunch of interconnecting pieces of various smaller stories telling a larger narrative don’t always line up neatly, that some of our heroes weren’t actually very heroic at all.

The Bible is a beautiful book, but also a complicated and messy one filled with ancient standards for a no-longer existing civilization in a bygone era. There’s a great deal of messiness and confusion in this ancient book, and simply saying the Bible is always right doesn’t do us any favors in dealing with this messiness.

The Bible has a very close relationship to the Church. It didn’t drop down out of heaven; it actually arose out of the history of God’s people. It’s messiness, in my mind is beautiful, because it speaks to what God is doing in the world, which is going to be messy because it involves us.

Also, if we’re being honest, it’s unfair to the Bible as well.

Inerrancy holds the Bible to an impossible standard of perfection and tries to make it support a weight it wasn’t meant to hold.

We’re talking about an ancient collection of sacred texts brought together over the ages, not golden tables that descended from the heavens.

Maybe we’d we better at extending grace to others if we could extend a bit of grace to the Bible. Maybe if we could be a bit more fluid in our approach to scripture, we’d actually end up with a stronger faith.

Second, we must acknowledge the Bible is not the cornerstone of the Christian faith. That position belongs to the Word of God in the person on Jesus Christ, not to a book. 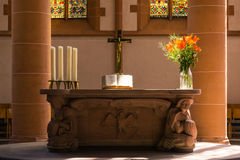 Don’t get me wrong. The Bible is an inspired text and a gift to humanity from God, but it is not God; and unfortunately, the manner in which we uplift the Bible trends toward idolatry.

The Bible can show us the way to the saving love of God, but it cannot in itself save. It can give us help in reconciling us to each other and to God, but it is not itself the Great Reconciler. We often attribute the being of God to the Bible, but to do so in an offense to both.

We must remember that for ages, the Bible as we know it did not exist. It was over three centuries into the history of the Church before the scriptures as we know them were compiled. Prior to that, even compositions of the Hebrew scriptures we know as the Old Testament were fairly recent, with the Septuagint (Greek translation of the Hebrew Scriptures) being completed by 132 BC. Prior to that, many of the books of the Old Testament weren’t compiled together in Hebrew until during and after the Babylonian Exile.

The Bible has a messy and complex history, just like the Church it emerged from and was written to. It’s not quite as seamless and perfect as we may have always believed, and that’s okay. Humanity has a messy history when it comes to communing with God and a long track record of getting it wrong. Yet, God still persists to love and speak to us, and the Bible reflects that.

Yes, it has gaps, contradictions, and unsolved mysteries. It has stories of violence, misogyny, and chaos; and it’s okay to be disturbed by them. These darker parts show a flawed humanity being met by God in the mess where they are and steadily called higher to be better to one another. These darker parts are stepping stones on the winding path where Jesus calls us to show grace and peace to all people in the name of the Kingdom.

There are parts of the Bible that inspire, parts that perplex, and parts that leave you with an open wound. I’m still wrestling, and like Jacob, I will wrestle until I am blessed. God hasn’t let go of me yet.

For more reading on this subject:

Is God a Moral Monster? by Paul Copan

A Flexible Faith by Bonnie Kristian