A guest post by Vinnie MacIsaac of “Simply Vinnie” blog, which you can check out here: Simply Vinnie

It is time to face the facts: Fake News targets Christians and their causes, conspiracies, and fears. It is time to face the music! Our constant side-taking in the ongoing culture wars of our time has made us the effortless ground zero and verdure victims of political fake news outlets who seek to twist and twine our precious Good News into scrupulous fake news.

What do you do when your Good News is used against you? For years Christians have owned the upper hand in American culture, but that day is long over. We all want to share the Good News of Jesus and His salvation but our ever enfeebled world culture is in rebellion to the Word of God, which can often leave certain fractions of the Christian faith feeling uncertain, unheard, or even threatened, thus making them easy prey for misinformation that reaffirms their worst fears. From Google ads to Facebook news stories, to Cambridge Analytica deep mining and Russian Twitter bots Christians are purposely mislead, confused, and tricked into thinking doom is at the door. Our faith, our heart, and soul, our deepest convictions about the world and eternity, are being data mined, repackaged, and direct-targeted back to us in the form of Fake News that we just can’t seem to get enough of. We are duped into hitting share, or retweet, without even thinking because fake news stories are designed to affirm our worst nightmares and vivify us into outrage and action!

It does not matter if you’re a Christian on the right or the left, there is enough fake news for both! I have heard everything from a certain politician talking to the dead in order to make deals with Satan to kill unborn babies, to another having secret meetings in the White House with the KKK to plot a race war to declare martial law and set up a dictatorship. Both sides have fake news and both sides attack each other’s legit news outlets calling them fake. Ironically, it is pluralism at its worst. The concept of a lie has become anything that does not fit “our truth” and the cause of Christ, the mission of the Church, or anything that just sets off our fears, nightmares of eschatological doomsday theories.

“The concept of a lie has become anything that does not fit “our truth.”

The Word of God and the Ten Commandments demand Christians be above spreading false news. “You shall not give false testimony against your neighbor” (Exodus 20:16). Understand that clicking share or retweet in outrage, fear, and without due diligence is actually sin and rebellion against God’s law. Willfully, or by just refusing to check, spreading Fake News, even for what you think are godly reasons is blatant, unabashed rebellion against the Kingdom of God, His truth, and the Holiness of His Name. It does not just reflect poorly on you as a credible source, but because you represent Him in this world, your spreading of Fake News makes Jesus Christ a laughing stock of your newsfeed.

“Your spreading of Fake News makes Jesus Christ a laughing stock of your newsfeed.”

Here are some simple tools to help prevent you from being the victim of Fake News:

If a headline is crazy sensational, it is suspect and needs to be investigated before you hit share, no matter how much it fits your worldview. No, Hilary Clinton did not hire a hit man on the FBI agent investigating her emails. No, the Pope did not endorse Donald Trump for President. And no, Pizzagate was not real. There was no such thing as a Democrat pedophile sex-ring being run out of various D.C. public restaurants. Sandy Hook was not staged, and the Parkland students are not actors playing a part hired by liberals to take down the NRA. The very sensational and absurd nature of these stories, you’d think, would stop reasonable Christians from sharing – but sadly these were all widely shared, believed, and viciously defended. Making us look like total fools.

Avoid News Outlets That Are Not Real

If you have never heard of a media outlet and can’t easily “google” them and find out who they are, or notice their name or URL is slightly misspelled or added to, then they likely are fake outlets peddling fake news. For example, ABCnews.com.co may look like ABCnews.com – but it is not. It is a crazy fake news site that I see folks on social media duped by all the time. Likewise, American News is a fake conservative news site with massive racial click bait, claiming Democrats are secret white-power insiders and that Denzel Washington endorsed Donald Trump. The Boston Tribune is a complete fake newspaper that sounded so real it sent hundreds of fake political news stories flying around the internet and millions believed were from a reputable print news source but were really from a newspaper that does not even exist. There is no end to legit sounding outlets that are completely fake (e.g. cnn-trending.com, CountyNewsroom.info, Globalresearch.ca, Liberty Writers News, Liberal Society, Now8News.com, NewsWatch33, UndergroundNewsReport.com, usatoday.com.co, etc).

Avoid Disregarding the Merit of a Story Based on Normal Bias

Mrs. Wray, my 10th grade English teacher, drilled into our minds that “everyone has a bias; those who claim no bias are liars. The job of the reader is to find the bias and weigh it out.”

All legit news outlets have biases, but bias does not make them fake. It is the reader’s job to see the bias, filter it, and at the same time not disregard thef acts in the reporting. I don’t care if it is CNN, FOX, the BBC, NPR, or MSNBC – all have normal bias and they spin the news towards those who are their core audience. Bias does not equal fake. Bias has facts colored by ideology; fake news has lies, not facts. Learn to sort bias. Avoid getting all our news from one type of bias to ensure you are balanced and practicing listening for bias.

Mrs. Wray was right, everyone has a bias but the Fact Checker’s job is to filter our the bias and check the facts. Yes, of course, they may have their own bias but they would not last long in the business if they were blatantly biased. They make bread and butter by being the least biased that they can possibly be.

So, if someone busts your Pizzagate story by fact-checking with Snopes.com you can’t just decry, “Snopes is liberally based, ergo Pizzagate stands!” No, Pizzagate is fake news of the worst kind and Snopes is a credible fact-checker with a low bias meter.

Stop it. Just stop it. You’re dumbing down the world, yourself, and being a horrible witness to the truth when you call any news you don’t like, don’t want, or does not fit your narrative “Fake News.” News is fake not because you don’t like it or the outlet or the report.  News is only fake when the alleged facts are not true, cannot be supported, and the story is based on a lie. No, Donald Trump – CNN is not fake news. No, Hillary Clinton – people voting for Trump are not all Deplorable. Sloganeering and labeling like “Sleepy Eyed Chuck Todd,” “Nasty Women,” “Deplorables,” “Snow Flakes,” or “Ideologues” are a sure fire way of knowing when the person you are reading and sharing from engages in dispensing fake news.

We use to say a picture is worth a thousand words, but these days a photo-shopped image is worth a thousand likes on Instagram. We put images in articles to re-enforce an idea, concept or reported fact. Images, in this day and age, are no longer proof of anything other than the existence of Photoshop. A condemning picture does not excuse you from checking if a story is true. Also, please beware pictures are strategically placed to keep you reading and processing the story. In a normal story, that is not a bad thing. But in a fake story placement is used for emotional manipulation. 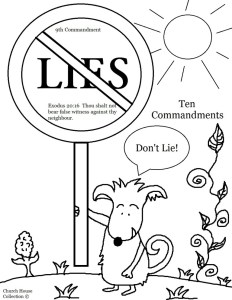 Think before you click. Think more before you get upset. Think even more before you buy into the emotional hook of a fake story. And think best before you share because it is not your name you embarrass – it is the credibility of those bearing the Gospel that is at stake. Don’t be duped into doing the devil’s deeds. Sharing Fake News is something we all have done in a moment of weakness, or by error, but we all must work to do better. Bearing false witness is a sin against both your brother and your God. Stop passively violating His holy law and governance as if it was no big deal. The world is laughing at how duped into rage and distrust Christians are. Let’s work with Jesus and clean up that image and be the witness of light and Good News we were called to be.

“Faith and Fake News” is by Vinnie MacIsaac and has been shared with permission from his blog. For other great articles by Vinnie, please drop by and follow his blog Simply Vinnie

Thank you Vinnie, for an incredible reminder for Christians to hold each other accountable to having truthful testimony – for cutting through the mess of modern news and giving us practical advice to stay true – and for allowing us to share your work!

10 thoughts on “Faith and Fake News: Facing The Facts”