I feel something awkward needs said. Awkward, because I’d expect more Christians to understand it without having to be told. But then again, Paul in Colossians 3:9 had to come right out and say, “Do not lie to each other” – I would have thought that went without saying, too.

Which is why it probably just needs to be said:

The Bible doesn’t give gun rights. The U.S. Constitution does. 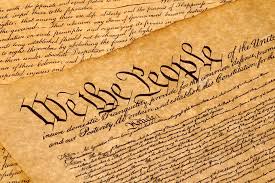 I know, I know. It’s easy to confuse the two. I mean… they were both written. In ink. On a surface. By men. They just have so much in common.

All joking aside, this general inability of American conservative Christians to discern between American values and God’s values is the root of our disastrous failure to reign in gun crime and mass shootings.

Case in point: God doesn’t value your freedom. At all.

I know. That rubs you wrong.

Sucks to be you. It would have been nice if God had asked your opinion before writing Scripture. But he didn’t and you’ve got to live with what he actually wrote. And he didn’t put freedom on his list of values.

From Old Testament to New, Scripture is okay on slavery. The Old Testament was so okay with it that God even created a provision on how slaves, if they loved being a slave a lot, could remain in slavery when their master tries to free them.

I’m serious. I couldn’t make this up if I tried. Deuteronomy 15:12-17 says that if a slave “says to you, ‘I do not want to leave you,’ because he loves you and your family and is well off with you, then take an awl and nail it through his earlobe into the door, and he will become your slave for life.”

The New Testament is just as okay on slavery, of course. Paul didn’t lead a revolution to free the slaves, nor did Peter. No Christian leader anywhere in Scripture condemned slavery – even Jesus dropped the ball on that one. It was Spartacus leading slave revolts, not Believers. Our physical freedom is not one of God’s values. The book of Philemon, in fact, exists for the sole purpose of telling a slave master that his runaway slave is returning to him – because THAT was the godly thing to do – and he should be received with grace (not freedom).

The pursuit of abolishing slavery in the world is a great one – it’s a beautiful endeavor, a humanitarian virtue, a modern ideal. But it’s not a biblical one. It’s not even a logical extension of godly values, really. God doesn’t value our physical freedom – only our spiritual freedom. He expects us to be faithful in service and loyalty to him, regardless of “slave or free.” And he expects Christian slave masters to be fair, kind, treating slaves as equals in Christ – but never tells them to be liberators.

Freedom is an American virtue, not a godly one.

And why would it be? God adamantly drills into our heads that this Earth is not our home, our citizenship is elsewhere, our rights and inheritance are spiritual and heavenly not physical and earthly. While here, we are to live as servants, putting ourselves last, not demanding our own perceived rights. But our American ideas of rights and freedoms – however wonderful – have promoted the idea that we should demand what we want and get angry when anyone infringes on our life, liberty, pursuit of happiness or right to bear arms.

We’re eager to fight with anyone who would take away our self-proclaimed “God given, unalienable” rights. But God never calls us to. In fact, he regularly and consistently tells us to give up our rights in order to be his subjects, advance his Kingdom, and live peaceable with outsiders while striving to win them to the Gospel.

Disclaimer: I own a gun.

I have a lifetime carry permit.

I use this gun for recreation and would be willing to use it to protect a life.

And I like having the right to own, carry and use my Springfield Armory XD Mod 2.

But I recognize this “right” (I see it more as a privilege that can be taken away if I’m irresponsible!) isn’t from God, and I shouldn’t defend it as if it is. I should also be on board with any demands the government makes to ensure gun ownership and use are safe for others. Loving neighbors, loving enemies, and submitting to authorities are all values of God – owning a gun is not.

Scripture obviously doesn’t speak of guns. It does speak of swords, though. The government is allowed weaponry in order to protect its people (Romans 13:4). The first seven verses of Romans 13 get pretty chatty about obeying that government, submitting to authority, and trusting that those in power are appointed by God – he gave them the sword and their power both. 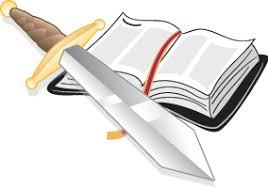 That speaks to one common defense of the 2nd Amendment – keeping guns so you can overthrow a government you don’t agree with. Paul told Christians in Rome, the capital of the Empire, that rebelling against government is out. Paul regularly advocated for Christians to obey the oppressive Roman leadership.

Paul followed in Jesus’ footsteps. Jesus obeyed the governing authorities (to his death) – and regularly advocated obeying government regardless of how corrupt. Turn the other cheek ring a bell?

Let me address one passage often misunderstood. In Luke 22:36, on the night he was betrayed Jesus tells his disciples, “If you don’t have a sword, sell your cloak and buy one.”

If you stop reading there, you miss the entire context.

First, Jesus immediately clarifies his purpose. He points out a prophecy that said he needed to be numbered with transgressors to be the Messiah and he says this prophecy is nearing fulfillment (v37). At Gethsemane, he’ll be accused of leading a riot – Jesus knows being found with swords will seal his fate. This is something he not only desires, but in fact insists on.

Second, the disciples say they have two swords and Jesus says “That’s enough” (v38). I don’t know the last sword fight you’ve been in, but two swords for eleven men against a deputy of soldiers sent to arrest an insurrection leader isn’t “enough.” The purpose of having swords was clearly not self-defense. It was fulfillment of prophecy and sealing Jesus’ fate.

Third, verses 49-51 show the disciples use a sword to attack and cut a man’s ear off and Jesus immediately reprimands them and heals the ear. In verse 52 he explicitly denies leading an armed rebellion or that clubs and swords would be needed for him to obey authorities and come under arrest willingly.

Even on the night before his crucifixion, Jesus wasn’t keen on his followers using swords to defend him or themselves or to fight corruption. A fight for freedom was the last thing he desired, and building a physical kingdom on force was the furthest thing from his mind. He constantly rebuked his disciples for thinking he was there to lead an armed physical revolt against Rome, rather than a disarmed spiritual revolt against sin.

I’m not making an argument for pacifism, per se. An argument can be made, for sure. The earliest Christians were all pacifists. It got complicated when the movement became so big that actual countries made Christianity a state religion – starting with Constantine and the Roman Empire. 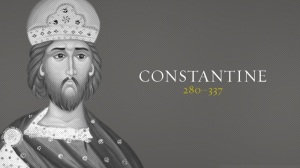 But before any discussion about gun control can make progress, conservative Christians (of whom I am one) must recognize they are fighting for an American value and not a godly one. In our rabid fury to defend the right to bear arms we often forget this right isn’t given by God. It’s given by America. God isn’t worried about our physical freedom – just our spiritual freedom. In that battle (not against flesh and blood), guns have no place.

Thoughtfully considering a variety of gun control measures is wholly consistent with Christian love for others and our communities. What, regrettably, more often occurs is we violently oppose logical measures because we think any gun control legislation is an affront to God himself.

Perhaps we just blindly accept party lines on issues like gun control. Perhaps we need to look closer at what Scripture actually tells us God values, to make sure we’re properly sorting out what God says to value and what America’s founders told us to value.

We might find that both values can coexist – the things God values and the things Americans value need not always conflict.

But we must learn to stop confusing the two. God doesn’t value gun rights. But making sure innocents aren’t gunned down, that guns aren’t accessible to kids who then have accidents, and that “bad guys” can’t easily access ridiculous quantities of armaments – these are all things Christians can agree with and advocate for, regardless of political party affiliation.

When an American claiming to follow Christ says guns are essential (they are not), guns are a God-given right (they are not), freedom is a value of God (it is not), and that logical measures such as background checks for gun purchases seem like government overreach – you can be sure they’ve confused their political beliefs for religious ones.