“A diamond ring is admired and worn with pride, but with the passing of time, it needs to be taken to a jeweler to be cleaned to restore its original brilliance. The more the ring is worn, the greater the need for occasional cleaning. The more familiar we are with a biblical story, the more difficult it is to view it outside of the way it has always been understood.” – Kenneth E. Bailey

The Nativity story is perhaps the most worn Bible story of all time, one we hear every year. Yet, we often don’t hear the account straight from Scripture. Instead, we get it from the kid’s pageant, the Hallmark card, the nativity set and a Charlie Brown special. We learn about the Nativity from Christmas carols and Christmas sermons and famous artwork and Precious Moments – anywhere but Scripture.

We’ve see so many “versions” that we don’t recognize the original. We’re so accustomed to added details that we’ve forgotten what’s really true.

You probably made great guesses. If you answered “I don’t know” to all seven, you might feel dejected. But you’d be 100% right.

We don’t know any of these things, despite what church pageants or Christmas sermons claim.

We don’t know the year Jesus was born in – it could be anytime from 7 BC to 9 AD, and definitely wasn’t year zero. Because there wasn’t a year zero. Gabriel came to Mary, but Scripture doesn’t name Joseph’s angel. The Bible doesn’t say Mary rode anything at all – for all we know, she walked. The Gospels don’t even say what kind of building Jesus was born in (our next post will discuss this!)

We have no clue how many wise men there were – we just know they brought three gifts. We don’t don’t even think they showed up at the Nativity – they probably arrived two years later, as Matthew calls Jesus a “child” instead of a baby and Herod decides to kill any boy two years or younger! And we definitely don’t know what the star of Bethlehem was – dozens of theories ranging from comet to miracle have been put forward.

Go ahead. Search the Scriptures, read the actual accounts. It’s pretty amazing how much we think we know about the Nativity that simply isn’t in there.

“It isn’t what you don’t know that gets you into trouble. It’s what you think you know for sure that just isn’t so.” – Anonymous

The Bible never says angels “sang” to the shepherds. There goes Angels we Have Heard on High. We Three Kings won’t fair much better – they weren’t kings at all, they were “magi” which means astrologers – a practice forbidden by the Old Testament Law. Not to worry, though – shepherds were considered spiritually “unclean” in Jesus’ day too, and they were invited to worship too. 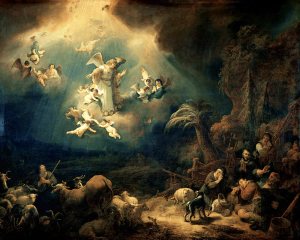 Some of our confusion comes from all the details movies and carols, sermons and pageants add to the story. Some of it comes from us imposing our own context on ancient texts.

None of us (probably) have spent time being shepherds. For all we know, shepherds are cool, right? I mean, the Lord is my shepherd and David was a shepherd who killed lions and became king. But the truth is, shepherds were poor and rarely owned the sheep. They were minimum wage, hired hands who slept in the dirt and were considered ceremonially unclean – read, “Couldn’t go to church without taking added steps” here. They got dirty. Their job required it.

People saw shepherds as necessary evils. Someone had to care for all those sacrificial sheep. Josephus says they killed a quarter million in just one Passover! But far from glorified, they were the scum of the earth, covered in earth. So much for the squeaky clean nativity set I just bought.

But some of these details really matter. If we don’t remember the real story, we won’t take the right message from it. Details can change the entire point of the Nativity. Perhaps a closer look at the actual text and context can teach us more than the glitter-covered Hallmark sweet-baby-Jesus Nativity card can.

This week we have some posts that want to remind us of the true story that often gets forgotten in the buzz. And when we look at the Scripture itself instead of all the additions, often a beautiful message appears that we often miss.

For now, we encourage you to read the actual text with your family this holiday season. The nativity set is nice, the carols are fun to sing, your Christmas day sermon and your favorite holiday movie are blessings to have. But never let them become a replacement for remembering the actual account, with all it’s mess and horror, hope and joy. This holiday season, don’t skip on the real Christmas story as told by Matthew and Luke.

“Herod, King of the Jews, enforced Roman rule at the local level, and in an irony of history we know Herod’s name mainly because of the massacre of the innocents. I have never seen a Christmas card depicting that state-sponsored act of terror, but it too was a part of Christ’s coming.” – Philip Yancey

4 thoughts on “Nativity, pure and simple”