Lately I’ve been feeling like I’ve completely lost myself and who I used to be. And I’m not sure exactly how to go about finding myself either.

Apparently it seems to start with me being able to lay down both my pride and my innate need to control everything. But that’s definitely way easier said than done because the world that I live in says that:

So we trudge on.

We keep pushing through.

Counting down the hours, days, weeks, etc. until the next thing we’re looking forward to.

‘Til the next time that we can veg out, disconnect, not have to engage with anyone or anything.

We’re not thriving. Some days we feel like we’re barely surviving.

But we don’t know how to get out.

“What’s the point? we ask. “Is anything ever really ever going to change? CAN we even change?”

Do we even want to?

We hate the drudgery, but we find plenty of excuses to stay in it.

But it’s NOT! Deep down inside we KNOW it’s NOT.

Once again though, that knowledge is quieted by that voice inside that once again says, “What’s the point? Why bother trying?”

And so we run back, sometimes slink back to those old familiar habits and addictions…

And it hurts too hard to ask the real questions, to deal with the real problems. We can handle a band-aid now and then, but full-on open heart surgery?? NO THANKS.

We’re fine with being fine – or so we tell ourselves as we drift numbly through life, refusing to deal with the bigger issues at hand.

We’re like an ostrich with its head buried in the sand. “If I don’t admit to it or see it, then it doesn’t exist…”

And YET there’s something inside that calls us to something MORE. Something Deeper. Bigger. Better. In the quiet and stillness of our hearts we yearn for it so deeply, even more so than words could bear. And so it pushes us back. Back to that moment (or moments) that broke us – asking, questioning, trying to find healing, to find a way to move on. And sometimes we do find a way to move on, to make progress.

And then some days we push it back under the rug. We hide it next to our hopes and dreams we once had and are trying our best to forget about.

Because while hope deferred does indeed make the heart sick, how MUCH MORE does a longing fulfilled become a tree of life?? And a tree of life is one with roots. Solid deep down roots!

Roots who KNOW who they BELONG to and where they’re supposed to be. Roots that have learned how to ABIDE, how to rest and draw nutrients from the soil they are in.

So we try once more, to surrender everything once again. And hope that even though we feel like we’re 50 steps behind (and we may very well be), we can still perhaps make just one step forward today. 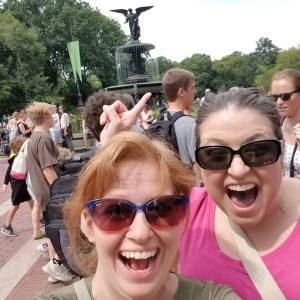 And in that moment we are hoping to be reminded that EACH STEP matters and each is PROGRESS whether it feels like it or not. And sometimes that hope is just audacious enough to keep us believing, to keep us moving forward til hopefully one day we’ll discover that we are indeed THRIVING instead of just surviving.

Because that’s what HOPE in Jesus does. It pushes us back to YOU, Jesus. It holds on and it won’t let go.  Because You won’t let go, You won’t relent until You have it all, until our whole heart is Yours. Because You know that Your mercies are NEW every morning, Great is Your Faithfulness!

And while we feel like we may never change, it turns out it’s ONLY  YOU who stays the same and that through You, we ARE capable of change! Hallelujah and AMEN! That’s the best news of all! That it is only through the One who never changes that we can become changed and transformed into Your likeness! More and more so each day. And as we do, we find our true selves once more.

And that person that we thought we had lost? She’s been there all along. All the best pieces of us, just waiting to be rediscovered and re-put on! Redressed and Renewed in You. Praise the Lord!

Julia Bowman is a Millennial Christian writing from Knoxville, Tennessee and you can find her regular blog HERE.

Also check out these testimonies:
Trust, Adventure, & How God Speaks to Me through Disney Movies
The Clearance Table Bride
The Skeptical Believer

8 thoughts on “A Search for Hope”