Often our biases get in the way of hearing wise words and the Good News. Isn’t it so true that the trappings and cultural aspects we adopt around our faith start becoming the focus – when it’s about something more?

I know many of you are like me. Like me, you’d click on this article just because of the title. Half of you hoped I’d lob some criticism at Jakes. The other half came to defend him in case I did. I think we can meet in the middle and say that God has servants everywhere and these servants take many forms and even if you disagree with one aspect of their beliefs or practices doesn’t mean you can’t find a whole lot of common ground between you.

God’s kingdom is diverse. It doesn’t look just like you. Or me. I like finding people who are grappling with the same difficulty we do at Rogues: that the modern American model of church doesn’t look a whole lot like – well, like anything biblical at all. And it’s encouraging to see men who have spent their lives serving the Kingdom taking a second look as well, willing to admit that a lot of the things they’ve become accustomed to aren’t really the main point. 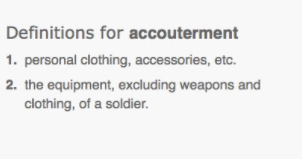 Accouterments are accessories. It sounds weird to say, but it is not wrong to… ahem… accessorize our faith. One of the most beautiful things about Christianity – one of the things Judaism and Islam both lack – is its striking ability to mold into any culture, as opposed to moving into geographic regions and conforming culture to its own rigid mold of faith.

Christianity adopts whatever is already working well in a culture and baptizes it to the glory of God. When we come across Believers who look different or practice different or even believe different, there’s often a lot more common ground than there is difference. This is especially true when we strip down the cultural additions that are convenient in our context and focus on the unified message we are all called to share.

In Jakes’ words, the accessories we attach to religion often block our view from revelation. I can say amen to that, no matter who said it.