I recently had a great week with two mentors of mine and two young men I get to mentor. We built a retaining wall and it took everything we had, from wracking our brain for problem solving to every ounce of strength we could muster. And we had an incredible time – not only building something together, but learning from and teaching each other.

Recently I was asked by a young man if I’d mentor him regularly. I recently launched a mentoring program for a local organization. I mentored 11 people who will now turn around and mentor new volunteers for that organization. I don’t believe I could have achieved any of this, had I not had my own mentors teaching me and guiding me, protecting me and pushing me forward.

It sometimes amazes me how few people have really good mentors in life. Even though it shouldn’t – I’ve had to be particularly intentional to have mentors in my own life. It may be that finding mentors doesn’t come naturally to most people. Generally we don’t “like” school, for instance – we seem to have a natural inclination to put “learning” of any sort on our list of “not fun” things to spend time on.

But mentoring makes all the difference in life. You won’t live long enough to make all the mistakes on your own, so you can get a big head start by learning from others. Mentors can teach you what did work for them and what didn’t. They can give you perspective that you are lacking and share from their experience. Mentors also provide a companion that can help on any journey you take – no one wants to feel alone, after all.

“passing on” – giving wisdom to the next generation. Making disciples (aka mentoring) is our primary mission, after all. Iron sharpens iron, as a man sharpens another (Proverbs 27:17). Paul reminded Timothy of how, just as Paul mentored Timothy, Timothy should step up to mentor others. “The things which you have heard from me in the presence of many witnesses, entrust these to faithful men who will be able to teach others also” (2 Timothy 2:2).

It is often said that the church is never more than one generation away from extinction. The moment one generation fails to pass the faith on well to the next, it could be all over. 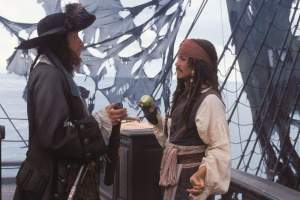 If I might borrow from heroes of mine, Captain Jack Sparrow and Captain Hector Barbossa? Barbossa warns Sparrow, “The problem with being the last of anything, by and by there be none left at all.” Sparrow replies, “Sometimes things come back mate. We’re livin’ proof, you and me.” And Barbossa wisely advises, “Aye, but that’s a gamble of long odds, ain’t it? There’s never a guarantee of comin’ back. But passin’ on, that’s dead certain.”

Christians passing on the hope that they hold has remained the primary vehicle God has used to expand His Kingdom and bring a lost world to saving grace. And while if we fail, God will preserve a remnant – if we want to see a vibrant Christian future we’ll need to work hard at passing on.

If the Millennial generation is drifting, it might be an indication that we aren’t doing a good job at passing on – and might be a warning of where we need to put more effort.

What we’d like to see is more Boomers and Gen Xers inspired to take Millennials under their wing. Find a young person at church and invite them into a relationship. You’ll be surprised to find you’ll enjoy many of the same things, and you’ll learn a lot from them even as they are learning a lot from you.

We’d like to see more Millennials pursuing mentors, recognizing their need to find people who can help them grow in faith as well as serve the Lord more effectively in their own lives.

Finally, we’d like to see more Millennials mentoring younger folk. Millennials will need to start learning to pass on tot he next generation as well. They must recognize that even if previous generations often let them down when it comes to passing on what is right and true, it’s still going to be our responsibility to step up and make sure we don’t do the same.