A big part of Rogue Millennials is encouraging believers to “own” their personal ministry for Christ and his Kingdom. Every believer is called to be part of a holy priesthood. Holy means “set apart” and priesthood means being a leader in spiritual matters – a leader means leading the way, showing the way, setting the example and bringing others along on the journey.

Every Christian can have a personal ministry and it can be simple – it is often things you are already good at. Are you great at cooking? Cook meals for people who might have trouble getting by on a healthy diet on their own – the elderly, the lonely, singles, young people, your home group. Are you great at carpentry? Always be ready to help a friend when they have a need you can provide. Whether you’re an electrician or a teacher, good at sewing or good at art, God has things you can do to show his love to others.

Acts 9 tells us a wonderful story that reminds us of how effective having a personal ministry can be:

36 In Joppa there was a disciple named Tabitha (in Greek her name is Dorcas, “gazelle”); she was always doing good and helping the poor. 37 About that time she became sick and died, and her body was washed and placed in an upstairs room. 38 Lydda was near Joppa; so when the disciples heard that Peter was in Lydda, they sent two men to him and urged him, “Please come at once!”

39 Peter went with them, and when he arrived he was taken upstairs to the room. All the widows stood around him, crying and showing him the robes and other clothing that Dorcas had made while she was still with them.

40 Peter sent them all out of the room; then he got down on his knees and prayed. Turning toward the dead woman, he said, “Tabitha, get up.”She opened her eyes, and seeing Peter she sat up. 41 He took her by the hand and helped her to her feet. Then he called for the believers, especially the widows, and presented her to them alive. 42 This became known all over Joppa, and many people believed in the Lord. 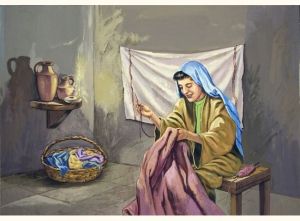 Do people believe in the Lord because he does magic tricks? No! Because he cares. Because he cares about what we care about. Because when a person died in their community who emptied herself into a personal ministry, making clothes for widows, he cared enough to bring her back to them. How cool is that? Your personal ministry can impact far more people than you could ever know, because it’s in the slow accumulation of many kindnesses that greatness happens.

Each act of kindness, each act of personal ministry might just be a single drop in a vast ocean. But as Adam Ewing says, “What is an ocean, but a multitude of drops?”

Practicing a personal ministry is essentially an act of trading your time or finances or skills or emotions, etc, for a bigger impact in God’s kingdom. You trade something of yourself for nothing for yourself, but rather to be part of something bigger. You do it as an act of thanksgiving, and as an act of worship, and as an act of compassion. For a quick encouraging video about personal ministry, check out this 2 minute Youtube clip and think on what you can do for the kingdom each day! What is a Trader?