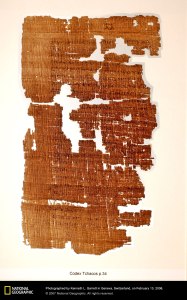 Everyone has heard of them: those “books that didn’t make it into the Bible.” What about them? Are they evidence of “competing Christianities” in the early centuries? Are the Gospels that “made the cut” the only accounts we can trust? Or do the lost Gospels show a cover-up by power-hungry church leaders? Are these reliable histories that tell the truth about Jesus?

These are important questions for every Christian to tackle, which is why it surprises me I never heard a sermon on them growing up. I never heard an intelligent treatment of them in seven years of seminary either, but in conversations with real people harboring real doubts they are a (understandably!) commonplace concern.

I recently taught on the lost Gospels in our house church and the feedback was extremely positive. A friend shared, “I honestly questioned the validity of the Bible because of the ‘lost’ gospels and why they weren’t included. This cleared a lot up for me.” Since churches often avoid messy topics, we figured Rogues might as well jump in.

Just a warning though – this is hardly exhaustive. It’s really more a taste, and we encourage you to dig deeper. The lost Gospels and other “extra-biblical” books are freely available online and plenty of books about their content have been written by scholars. Here is what you need to know:

It is important for Believers to understand with confidence that the writings passed down to us are accurate and original, and to understand that lost Gospels were never serious contenders. Often news reporters trying to make a great headline or popular media such as The DaVinci Code present a view full of distortion, as if these books were taken seriously until some council voted them out of the canon. The opposite is true, that early Christians knew the difference from the start. There was no confusion in the early church over which were authentic and which were false.