A 2016 Gallup poll reported 59% of older Millennials are single and have never been married. Only 27% of Millennials are effectively married, when factoring in the separated, divorced, widowed or those living unwed with a partner. If that doesn’t sound shocking,  36% of Gen X, 48% of Boomers and 65% of Traditionalists were married by the same stage. Many Millennials will marry some day, but embrace singleness as a long and more productive life stage than previous generations. We reached out to a Millennial single who mentors other single Millennials:

“Single. Just as valuable, just as useful, just as loved.”

Every “Single” is different, yet we each can relate in how we were raised, our worldview, about how the people around us did and still do shape our mindset concerning the subject of singleness. Many of us “still-singles” grew up in church. We were told all our lives indirectly (or sometimes directly if your parents were more like mine!) that we should expect to be married by a certain age or time frame, that marriage is the end goal and that being single is just not a long-term option. Our parents prepared us to date, gave us the birds and the bees talk, and educated us about abstinence and considering the consequences of both premarital physical relations and choosing the wrong spouse.

When we got out of high school, we went to college in order to find “the one” and obtain a solid educational background with hopefully an awesome paying job at the end of our hard-fought years of study. After graduating college we would have the wedding, soon after that some kids, and the rest would be history. At that point, we would have been declared “whole.” Yet somewhere along the line as we kept having birthdays past the age of 22 without bringing home a serious candidate to become “the one,” being single started to feel more like a consequence in and of itself. Our family and church mentors have been “left waiting” (more like… let down?). 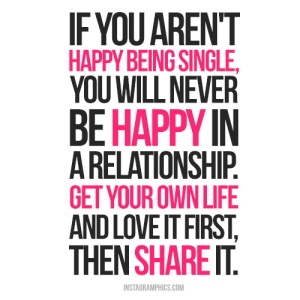 Naturally, when you find you are the one whose “things that should be happening for” aren’t happening, you begin to start thinking:

It’s easy to see why we begin to feel insecure, lost and alone. But are we? Don’t we have purpose? Is being single bad? Are we really on the “losing” end of life? Have we failed to accomplish something we should have – or have we remained single by choice? People in your church and sometimes your own parents may begin to question if they erred in your upbringing, or perhaps wonder if something is wrong with you. Some may even believe this is a “punishment” – maybe we did something so displeasing to God that He has had no choice but to leave us in our single state. If so, being single might mean you lack purpose, have no role in society, that you’ll never be a contributor to the Church…

This would be false, though. These people would be mistaken. It’s often a choice and often a blessing – for us and for the Kingdom.

Even the best-meaning people fail to realize the reasons we are single – reasons we chose. Some of us have witnessed how hard marriage is and how being married appears to have lots of consequences (compromises?). Some of us have experienced pain in our own hearts from relationships – or have witnessed what happened to others we hold dear – making us more cautious on who we date or who we marry or if we can trust choosing anyone for as long as “until death do we part.” Some of us have friends or family that have been married then divorced, one or more times, tending to nix a lot of the “selling points” of married life. We worry if we get married if divorce is in our future – and if there are children, what effects those consequences will have on them.

Sometimes the waters are not even that deep when looking for reasons someone is still single. We see how being married has plenty of advantages; but so does being single. Just tally how much time, money, energy, emotion, effort, compromise goes into a marriage – a single has all of that to spend in other ways!

In the church arena, understand there are often valid reasons people are single. And that singles need support, just like anyone – not treated differently or as though they are lacking. Speak into their lives: know with confidence that being single is awesome and you can embrace it! You have an opportunity to grow closer to God without the distractions and the give-and-take of a marriage relationship or balancing life with kids yet. You have the ability to go and serve on the mission field, whether locally or abroad, without worrying about ties and responsibilities back home. You have the ability to take any job in any country, state or city that God leads you to.

You have nothing to hold you back. You have the ability to use the gifts that God has given to you in far more reaching ways than your married counterparts do. They are often confined to using theirs to raise a family and help the Kingdom on the side, while you get to partner with God in reaching those on the outside who would never be reached if Christians were all preoccupied with internal concerns.

So ask yourself – how is being single not a good thing? We all want companionship and we can have that! We have it wherever we cultivate it. Begin or continue growing in this wonderful relationship with Jesus. If singleness does not last, it’ll only make you more ready for the married life beyond. Use this time to prioritize spending time with the friends that you hang with, your family, and the rest that love you! Do this whether you are in search of that right person or happy just being single. Enjoy your singleness and use it for a purpose! Conquer the dreams that God has given to you! MOVE IT! Get going now – you have a ton of options to explore!

from Tennessee to Florida to Guatemala and beyond!

2 thoughts on “Singleness – A Millennial Voice”